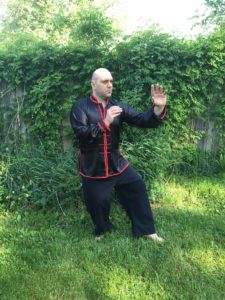 Sifu Igor Shimansky earned his Ph. D. from University of Maryland in Applied Mathematics, and Diploma (similar to a Master’s Degree) from Moscow Institute of Physics and Technology (МФТИ) in Mathematics and Physics.  His other passion for years was studying martial arts and movement.  For many years, he taught Tai Chi, Kung Fu, and Cardio Kickboxing; practiced Mixed Martial Arts, Brazilian Jiu Jitsu, Silat, and Jeet Kung Do/Kali; and trained in Ballroom Dancing and Yoga.

His first exposure to Tai Chi occurred at Baltimore Martial Arts Academy, and he did Yang Style 108 Form as a part of his Kung Fu Black Belt Test there in 2000.  Since then he has studied several other styles of Tai Chi including Old Yang style.   He has been a member of the World Taiji Boxing Association (WTBA) since 2015.