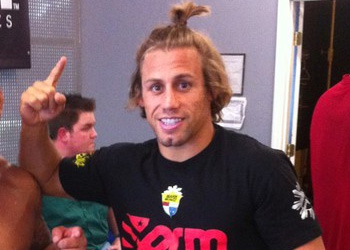 The MMA world was flipped upside-down Thursday when UFC president Dana White announced they were going to absorb the WEC. While some thought Urijah Faber might be saddened to see the company he helped build be wiped away with a blink of a eye, the WEC poster boy claims he couldn’t be happier. In fact, he says bring on the super-fights. “I’m stoked. No more explaining to people why I’m not in the UFC,” Faber stated. “We’re finally going to be under one banner, which means bigger opportunities, more exposure and less misunderstandings.” Although he appreciates the chance to achieve his “dream” of capturing a UFC title, first thing’s first for “The California Kid.” Faber headlines the WEC’s second-to-last show on November 11th against Takeya Mizugaki inside The Pearl at the Palms Casino Resort in Las Vegas, Nevada. After an unprecedented title run in the WEC’s featherweight division, Faber lost his belt to Mike Brown at WEC 36 and followed it up with a unanimous decision loss in their mulligan at WEC 41. What sealed the bantamweight deal for Faber must have been when Jose Aldo did THIS to his thigh at WEC 48 in April. Faber submitted the WEC’s current bantamweight champ in a 145-pound scrap back in March 2007. With an impressive win over the gritty Japanese fighter, it’s possible he could find himself right back in a championship battle. If that doesn’t work, the new powerhouse promotion he now works for can offer up a plethora of intriguing inter-divisional superfights, as well. See Video Here: Urijah Faber