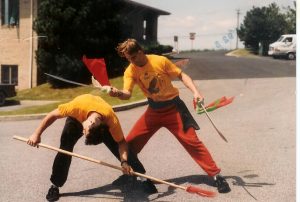 Kung Fu is among the most distinctive and ancient of the martial arts, having evolved from human observation of and respect for nature. Kung Fu simulates the movements of nature’s most graceful (and in some cases, most dangerous) creatures — among them, the tiger, monkey, crane, snake, and eagle.

Our school teaches a specific style of Kung Fu called T’ien Shan P’ai, or “The Celestial Mountain School.” Tien Shan Pai is a northern style which originated in the Tien Shan (天山派) mountains of northwestern China. T’ien Shan P’ai is a comprehensive martial art, incorporating elements of Shaolin Kung Fu, Tai Chi, Chi Kung, Hsing-I, Pa Kua, and Chin Na. This combination of styles provides a variety of fighting techniques to the student, giving him or her a wider range of possibilities in any fighting situation.

T’ien Shan P’ai is characterized by its blending of “soft” and “hard” styles, with both “long reach” and “short reach” techniques. A Tien Shan Pai fighter utilizes a method of feinting and striking along with blocks and angular attacks, making it a very effective form of self-defense. If one block fails, the second can cover. Footwork is considered essential to countering attacks and is often overlooked by many other traditional styles. Tien Shan Pai focuses on low, steady steps to the side, along with swift “hidden” steps to trick the opponent.

Tien Shan Pai’s eclectic blending of styles, especially Tai Chi, is very important. Tien Shan Pai Kung Fu involves hard work and a lot of practice. Working out hard is strenuous to the body thus the body needs rest and recovery that Tai Chi offers. Shih Fu Rick Wheatley, pictured above, once told his student Gary Berger, present owner of Baltimore Martial Arts, that Bruce Lee was criticized as having a lack of balance in his training which may have contributed to his untimely death. Everyone and everything in this life needs to have balance. Baltimore Tai Chi contributes rest and recovery to a physically demanding martial art such as Kung Fu 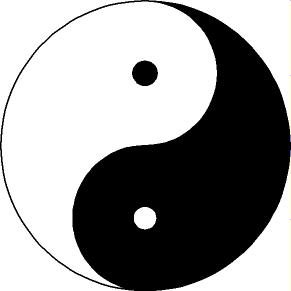 Baltimore Tai Chi is integrated into our Kung Fu classes as well as taught independently. Often our Kung Fu classes conclude with Tai Chi practice which is a welcome part of the workout. Tai Chi emphasizes relaxation of the body and of the mind. Some have called Tai Chi “Moving Meditation”. Meditation is akin to a computer eradicating unnecessary information and data which clogs up memory. Like computers, our minds accumulate an excessive amount of information throughout the day that serves no purpose other than to confuse critical thinking and cause stress. Whether its Tai Chi or some other form of meditation everyone should incorporate it somehow into their lives.