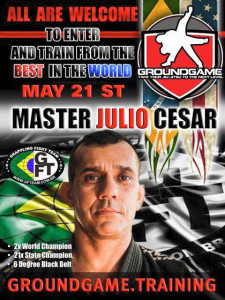 Most practitioners of Brazilian Jiu-Jitsu are unaware that there are other lineages of Brazilian Jiu-Jitsu besides the Gracies. The founder of Brazilian Jiu-Jitsu,Ã‚Â  Mitsuyo Maeda, had TWO disciples - Carlos Gracie and Luiz FranÃƒÂ§a. One of Franca's students was a man named Oswaldo Fadda. Despite being labeled an outcast by the Gracie family, Fadda opened his own academy on the outskirts of Rio on January 27, 1950. Fadda and his students specialized in foot locks and a year later he issued a challenge to the Gracies in the media. Hellio Gracie and his students accepted the challenge and lost badly! Fadda was the first man to ever have beaten Helio Gracie yet few people know this information. Fadda's linaege continues today in schools like Ground Fight Team, Nova UniÃƒÂ£o, Deo Jiu-Jitsu (Deoclecio Paulo) and Equipe Mestre Wilson Jiu-Jitsu (Wilson Pereira Mattos).