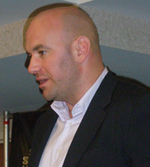 The reports of an injury to Vitor Belfort are, indeed, false, as UFC President Dana White cleared up the situation on Twitter on Wednesday. After Belfort's coach Shawn Tompkins posted on Facebook that Vitor was 100% healthy, speculation began that he was pulled from his UFC 122 fight with Yushin Okami to face UFC Middleweight Champion Anderson Silva in the wake of Chael Sonnen's failed steroid test at UFC 117. That is exactly the case, as White Tweeted, "Vitor is not injured. He is going to fight Anderson for the title and the winner of Marquart and Okami are next." There is still no word as to exactly when the fight will take place, but with the Sonnen-Silva rematch initially expected on New Year's Day, that's likely when this fight will take place. I want to see the Sonnen-Silva rematch first, but we will have to wait and see what happens.